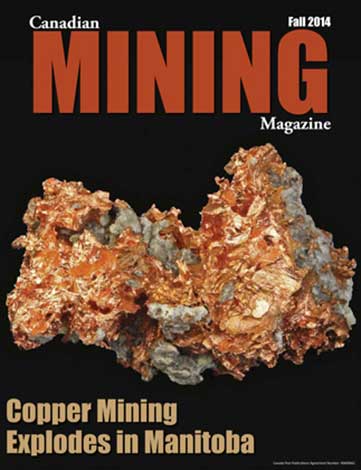 This issue of Canadian Mining Magazine focused on copper mining in Manitoba. Our lead story, The Future of Mining in Manitoba Looks Bright, highlighted the problems and challenges occurring from the lack of exploration in Manitoba. It also focused on mining’s role in the economic and social history of Manitoba and the reasons to have hope for its future in the province. The Manitoba coverage also looked at the progression and completion of the Reed Copper Mine, Manitoba-based Wildcat Exploration’s move into the Uchi sub-province in Ontario, its partnership in the Thompson Nickel belt and its recent alliance with Doe Run Canadian Exploration ULC, and how Northern Manitoba Mining Academy is educating new employees.

Features in the magazine explored how to manage corruption risk in the mining sector; implementing a Human Resources structure early enough in a project to prevent future manageable challenges from becoming major issues; and innovative currency hedging opportunities, including the consequences for emerging markets, advantages and hedging risks in key markets.

The magazine’s regular departments include a Transaction Report on the emergence of small-cap royalty companies hoping to make a profit and how investments in a royalty company should be made with caution and legal counsel; and an HR Report on the complexity of workplace culture; an International Update on the government of Canada’s implementation of standards on mandatory reporting of payments for the extractive sectors; Junior Mining News about de-risking opportunities and why juniors must undertake comprehensive due diligence; and a Tax Time report on lawyer-client privilege and the difference between the two main types of privilege in Canada: solicitor-client and litigation. Tools of the Trade, News Watch and Upcoming Events round out this edition’s line-up.