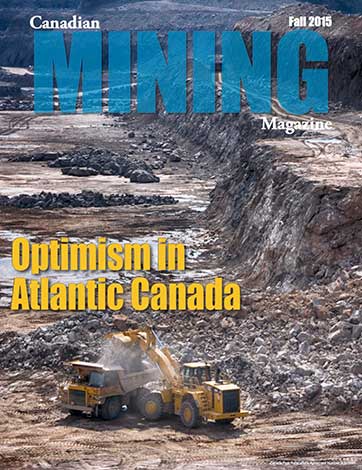 This issue of Canadian Mining Magazine explored mining opportunities in Atlantic Canada (New Brunswick, Nova Scotia, Newfoundland and Labrador). The coverage included a message from each of the three provinces’ mining-related Ministers, as well as feature articles on all three regions. Features included details on New Brunswick and how excitement is growing due to activity from Trevali’s Caribou Mine and Mill Complex, and Potash Corp.’s recent activity; how challenges in Nova Scotia will hopefully be old news as gypsum demand increases in the United States; and how mining incentives in Newfoundland and Labrador are continuing to support exploration activity, even during the downturn.

Other articles in the magazine included features on how one Canadian junior mining company was able to make key changes to their operation and, as a result, raise much needed financing. Another feature showcases the recent Coal Association of Canada Conference, which was held in September, and drew over 200 participants. The theme, Building and Investing for Recovery, led to much discussion and optimism.

Finally, the magazine’s regular departments include information on new national occupational standards, an article on how to optimize your press releases, why it might be time to rethink provincial resource taxes…and more. Our cross-Canada News Watch round-up completes the magazine, with a look at mining activity in each region/province.