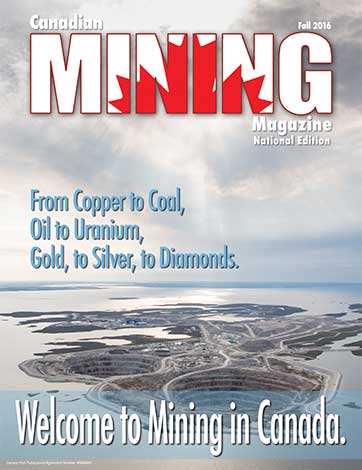 Once every four years, Canadian Mining Magazine publishes a special commemorative issue that zeroes in on mining activity all across the country. This September, we published this edition to coincide with MINExpo International, which takes place in Las Vegas, Nevada, the third week of September. We are excited that the issue will be available for attendees to pick up at the CAMESE pavilion.
The magazine featured a message from every single mining-related minister in Canada, including the Canadian Minister of Natural Resources, Jim Carr. All other provinces and territories contributed a message, many of which discussed the mining climate in their respective regions, mines in development or under discussion, and mining regulations that make their regions a good place to invest. Cross-Canada coverage also included a feature story on each province and territory.
The lead feature story in the Fall issue discussed a connected mine site and how trucks and trains could haul ore on programmed routes, sensors could provide real-time feedback on machinery, and up to the minute data could optimize a mine site’s assets, increasing productivity. The second feature article showcased how innovative apps can protect mining employees when they’re travelling to dangerous locations, and the risks that you and your employees should be prepared for. The final feature story looked at how Canada provides a rich competitive environment in which industry suppliers are known for innovation and providing high quality services.
The magazine’s reports covered a wide array of topics, including promoting infrastructure in Canada’s North, lessons on proxy fights stemming from the U.S. presidential race, facing mining challenges head-on, the case for phased production, tax rules related to mining operations outside of Canada. We wrapped up the issue with a look at the summer’s major mining headlines and coverage of the latest industry tools to market.
Up next…mining in Ontario!