When it comes to pumping slurry, there can be very few applications that are more challenging than the hydro-transport of heavy duty slurries in oil sands production.  Not only do the pumps have to contend with the highly aggressive nature of the fluid being pumped, they are also expected to operate in some of the harshest environments in the world.

In January 2020 GIW Industries Inc., a KSB Group company, commissioned its largest ever heavy duty centrifugal slurry pump for operation in Canada’s oil sands, namely the TBC (Tie Bolt Construction) -92.  Named after its 92-inch (2337mm) impeller, the TBC-92 is the largest and heaviest slurry pump available in the oil sands industry and emerges as the latest in a line of powerful high-pressure pumps offered by GIW.

Slurry transport covers a considerable range of industry sectors, ranging from food and beverage to mining.  What is common to all is that the pumps used must be able to transport liquids containing particles and solids of varying sizes and viscosities.  In mining, dredging and oil sands production the biggest challenge is to accommodate high density slurry and highly abrasive grits.  It is essential that the slurry passes through the pump with the minimum amount of wear to the pump casing, impeller, shaft, and sealing mechanism.  Furthermore, they must be capable of delivering high flows and withstanding harsh operating environments.

The province of Alberta has the world’s third largest oil reserves and these are in the form of oil sands.  Extracting and processing the oil from the sands and bed rock is a challenging process involving the removal of bituminous ore which is transported to a crushing plant.  The crushed ore is then mixed with warm water to form dense slurry that can be transported in the pipeline toward extraction, where the bitumen is separated from the sand and rock.   After extraction, the remaining solids (or tailings) are often transported via different pumps to settling ponds.

The processes require extensive use of slurry and water transportation pumps capable of handling vast quantities of liquids at high pressures and high temperatures.  Drawing on its many years of designing slurry pumps for mining, GIW has custom-engineered slurry pumps that combine advanced materials, hydraulics and patented mechanical designs, the latest of which is the TBC-92.

“Our client needed a higher-capacity pump which was capable of 10,000 – 11,000 cubic meters per hour of output at nearly 40 meters of developed head and a maximum working pressure of 4000 kPa,” reports  Mollie Timmerman, GIW Business Development Manager. “The pump also needed to be able to pass rocks of approximately 130mm in diameter (with a total passage size requirement of 10 inches or 254 mm) and handle slurry densities in excess of 1.5 SG.  In addition, the customer was targeting a maintenance interval (operational time between planned maintenance) of around 3,000 hours.  They had expressed an interest in maximizing the maintenance intervals and based on initial wear indications, they are currently hoping to achieve around 6,000 hours between pump overhauls (i.e. 6 to 8 months).”

The immediate application for the first batch of GIW’s TBC-92 pumps in Alberta is in hydro-transport service, where they are used to move bituminous ore from the crusher to the extraction plant.  The liquid pumped is a mixture of water, bitumen, sand, and large rocks.  Screens are in place to keep these rocks to a manageable size for the process, but the top size can still often reach up to 130 mm in diameter (or larger).  The abrasive nature of the slurry is what separates a slurry pump apart from other pumps used in the industry.  Wear and erosion are facts of life, and GIW has decades of experience in the design of slurry pumps and the development of materials to help extend the service life of these critical components to match the planned maintenance cycles in the plant.

“GIW already had a pump capable of the output requirement, this being the MDX-750, which has been a popular size in mill duties for nearly 10 years throughout Central and South America,” explains Mollie Timmerman. ”However, the customer’s application required a pump with higher pressure capabilities  and the capability of handling larger rocks so we responded with the development of the TBC-92 which provided the best solution for maximised production.

The construction style of GIW’s TBC pump range feature large, ribbed plates held together with tie bolts for very high pressure service and maximum wear performance.  First developed for dredge service, then later introduced into the oil sands in the 1990’s, the TBC pump series has grown into a fully developed range of pumps serving the oil sands, phosphate, dredging, and hard rock mining industries for tailings and hydro-transport applications.  The pumps are often grouped together in booster stations to build pressure as high as 750 psi (5171 kPa) to account for the pipe losses encountered over such long distances.  The robust construction of the TBC pump is perfectly suited to do the job, while ensuring maximum availability of the equipment under heavily abrasive wear.

Capable of delivering pressure up to 37bar and flows in excess of 18,200m³/h and temperatures up to 120⁰C, the TBC range is a horizontal, end suction centrifugal pump that gives maximum resistance to wear.  Simple to maintain, the pump’s tie-bolt design transfers stress loads away from the wear resistant white iron casing to the non-bearing side plates without the use of heavy and unwieldy double-wall construction. The TBC-92 combines the best elements of earlier TBC models, including the ground-breaking TBC-84 oil sands tailing pump, also known as the ‘Super Pump’.  The pump also incorporates features from GIW’s cutting-edge MDX product line, which is used in heavy-duty mining circuits throughout the world of hard rock mining.

In total, the TBC-92 weighs about 209,000lbs (95,000kg) – roughly equivalent to a fully-loaded Airbus A321 aeroplane.  The casing alone weighs 34,000lbs (15,500kg). Key features of the pump include a slurry diverter that dramatically increases suction liner life by reducing particle recirculation between the impeller and the liner.  The large diameter impeller allows the pump to run at slower speeds so that wear life is enhanced.  The lower speed also gives the pump the ability to operate over a wider range of flows in order to accommodate fluctuating flow conditions.

To make maintenance easier, the pump is fitted with a special two-piece suction plate design which helps to reduce tool time and provide safer lifting. Customers receive pump-specific lifting devices to facilitate the safe removal and installation of wear components. The pump also features a long-lasting suction liner that can be adjusted without needing to shut the pump down.

The commissioning of the TBC-92 marks an important milestone for GIW, which now has pumps in service at all operating Canadian oil sands plants for hydro-transport applications.  The TBC-92 has been designed to tackle heavy-duty slurry transport while providing a low total cost of ownership.  Minimal labour and maintenance time helps to maximize production and profit.

“This new pump incorporates the lessons learned from operating in the oil sands over many years, and features our latest hydraulic and wear technologies,” says Mollie Timmerman. “Because this is the heaviest TBC pump we have ever designed, particular attention was given to maintainability, as well as material selection and construction of the pressure-containing components.”

That GIW has established itself as a significant force in pumping solutions for the oil sands industry is far from surprising given that it has been developing pumping technologies and wear resistant materials in the global mining industry since the 1940s.

These pumps have had a considerable impact on the way that the excavated sand, rock, and bitumen are transported to the upgrader plant.  By adding water to the excavated material it becomes highly efficient to pump the slurry along a pipeline to the upgrader.  The pipeline agitation assists in separating the bitumen from the sand as it is transported, plus there is the additional benefit of removing the use of trucks.  GIW has estimated that the cost of moving oil sand in this way can cut costs by $2 a barrel, and its far more environmental friendly.  These pumps also play a major role in transporting the coarse tailings to the tailings ponds. GIW supplies pumps used in the extraction process and other areas of production (HVF, MDX, LSA, etc.).

Understanding the nature of slurries and how they behave when being pumped has been fundamental to the development of these products.  GIW has been obtaining slurry samples from customers over many years for testing hydraulics and materials both for pumps and pipelines. Research & Development facilities include multiple slurry test beds on the campus, together with a hydraulics laboratory that is dedicated to pump performance testing.  These activities are central to the company’s pump development programmes.  If companies are experiencing problems the GIW R&D personnel can see where the problem lies and offer advice for remedial action.  Experience does indicate that in many cases the problem lies not with the pump, but in the interaction between the pipeline and the pump.

Feedback from customers on applications helps in the development of new tools and pump designs.  By bringing together customers and academics from all over the world to share their experience and research with in-house experts, the massive investment in research, development and manufacturing has advanced the design of all of the GIW pump products, materials and wear-resistant components.

“There is a clear trend toward larger pumps in mining and dredging, and the oil sands are no exception,” comments Leo Perry, GIW Lead Product Manager.  “The first TBC pump in the oil sands was the TBC-46 (46” being the diameter of the impeller).  Customers are designing their facilities for higher and higher production, and demanding the same of the equipment that keeps their production moving.  While these larger pumps demand more power, they also allow for greater production with less downtime required for maintenance.  Overall, the efficiency improves when compared to the same output from a larger quantity of smaller pumps. “

In conclusion, he says, “Larger pumps go hand in hand with larger facilities, larger pipelines, and increased production, all of which continue to trend higher year after year.  Other customers and industries have also shown an interest in this size, and it would be no surprise at all to see more of these pumps built in the near future for similar applications.” 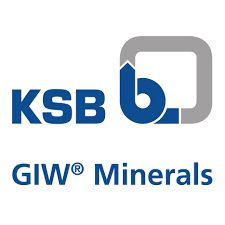 With its subsidiary GIW Industries, Inc., KSB has the know-how and the infrastructure to deliver first class slurry solutions and excellent service.  This makes KSB your undisputed first choice as a provider of minerals processing and slurry pump solutions.

Through the GIW® Minerals product brand, KSB strives to be an innovative partner that provides you with the best and longest wearing slurry solutions. We are your partner, today and in the future.

Bryan Orchard is an independent technical author and journalist who has been working in the global pumps and valves industry for over three decades.

Mining the Future with the Right ERP Solution