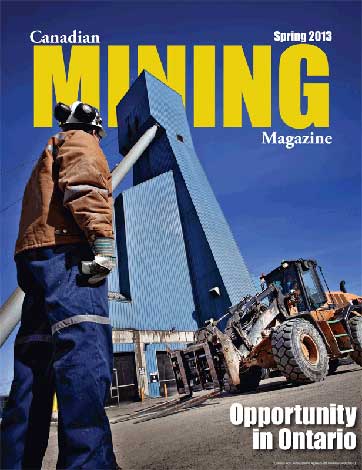 The Spring 2013 edition made the trek to Ontario, where early estimates indicate that mineral exploration and deposit appraisal expenditures for 2012 exceeded $900 million. The Ontario coverage included an article from the Ministry of Northern Development and Mines; an update on the exciting Ring of Fire in Northern Ontario; and an update on Detour Gold, which poured its first bars in February; a look at Vale’s Sudbury expansions and opportunities. The Ontario edition also featured a guest article from the Goodman School of Mines, which will be streaming new graduates into the marketplace just as demand for their skills explodes. Finally, the edition took a look at the TSX and TSXV, which represents more mining companies than any other exchange in the world.

In addition to these great reads, our Feature stories covered single-asset miners, which are gaining attention; a comprehensive economic analysis for gold companies; a look at sustainable, low maintenance water treatment system being used at the Brucejack Mine in B.C.; and a recap of PDAC, which once again boasts over 30,000 attendees.

Finally, our departments―HR Report, Transaction Report, Junior Mining News, International Update, Tools of the Trade and News Watch―discuss everything from HR issues in Ontario’s North, to conflict minerals, to an analysis of the top 2012 deals and an outlook for 2013.