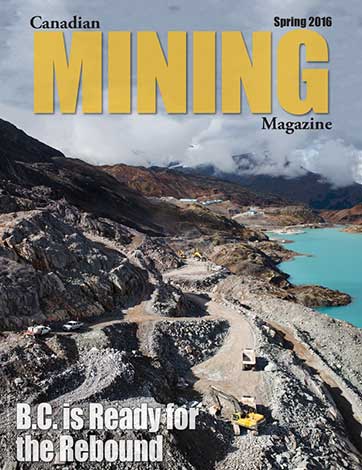 This issue of Canadian Mining Magazine explored mining activity in the province of British Columbia. The cover story discussed how difficult things have been for the sector, worldwide, but also provided a glimmer of hope by showcasing what’s right in B.C.’s industry, right now. This included details on how the province has given mines the ability to defer electricity costs when commodity prices are below a certain threshold, and details about a major project in the northern part of the province that is well underway. Pretium Resources’ Brucejack Gold Project will have a significant impact on the economy. The B.C. coverage also included an article about how miners and biologists are partnering with each other for caribou conservation.

Other articles included coverage on Integra Gold Corp.’s “Gold Rush Challenge,” which asked participants from around the world to review company data and come up with detailed exploration plans. More than $1 million was distributed to the winner and runner ups during a live event that was held during PDAC in March. Departments covered topics such as crowdfunding, strengthening talent by exploring diversity, flow-through financing, mining tax changes, and more.

Up next…a cross-Canada commemorative issue that will showcase every region of Canada!