When Tougher Does Not Mean Heavier or Uncomfortable 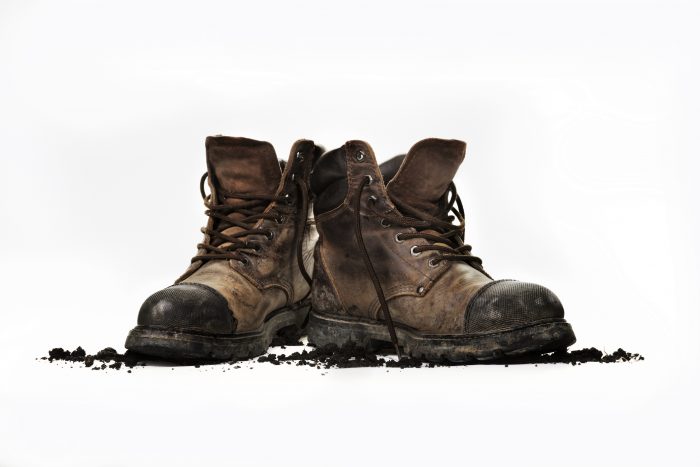 Scientific and technological advances have contributed significantly to improving the working conditions of miners.  But, in spite of these advancements, mining remains an occupation where the challenging workload is still a topic of concern.  And even though automation and use of machinery have replaced several tasks that were once performed manually, a considerable number of other tasks still require a human workforce.  Not only is the manual labourer essential, he or she also will also often use the weight of their body as a real working tool.
In order to perform in such a hostile environment, the safety boots of miners must be heavy-duty. Features such as the materials used, the required safety components, and the boot’s insulation are characteristics that cannot be overlooked and will inevitably impact the gauge and weight of a boot.  Ultimately, this heavy-duty build will often lead to a heavy, non-flexible boot that compromises comfort.
So to reduce the discomfort felt by miners in regard to their safety boots, STC Footwear has developed new products.

A metatarsal protection, although indispensable in such a dangerous environment, traditionally creates a challenge to the overall freedom of movement because of its inflexibility, particularly when it is external.  This protection requires that the boot has some rigidity.
STC Footwear, however, offers miners a wide range of boots where the metatarsal area is protected by an internal and semi-rigid component.  The characteristics of Metatech 360° and Metatech System Plus provide extended protection on the sides of the feet, while still allowing the footwear to be flexible and offering a greater freedom of movement.
Since each miner can travel up to 16 kilometres (10 miles) per day on rough terrain, safety boots must provide their user with good stability.  This stability is created with outsoles that have excellent traction, and with superb ankle support that will prevent the foot from twisting.
STC Footwear was inspired by the design of hiking shoes when developing an anti-spraining sole for the miner’s footwear.  This polypropylene sole, integrated within the anti-puncture sole, is even flexible enough to fold.   It also counteracts the sensation of rough terrain and irregularities under the foot.  Additionally, it provides good ankle support, preventing the foot from sliding inside the boot and the ankle to twist. A poorly supported foot can become overexerted, which can lead to earlier fatigue, increasing the risk of incidents on the ground. 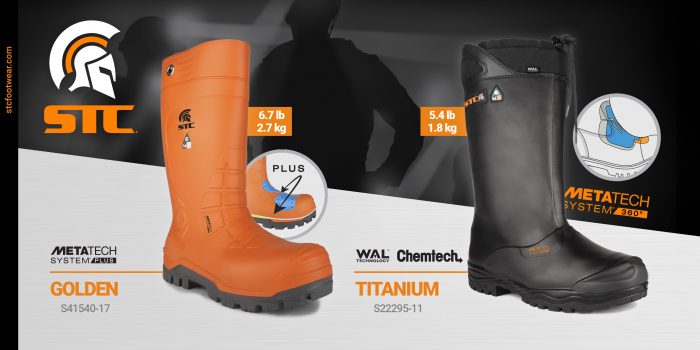 It goes without saying that the workplace conditions, as well as the environmental conditions of a mine, are hard on the safety equipment used.  Some examples include chemical spills, dust, humidity, temperature changes and variations in moisture level.  Legs, shins, knees and feet are body parts that are continually employed, resulting in a certain impact on the wear of the safety boot.  The challenge for STC Footwear is to offer a boot whose material is light-weight and durable.
WAL technology is up to meeting that challenge.  With its double-layered CHEMTECH microfiber that makes it possible to significantly increase durability by superimposing two layers of microfiber.  Abrasion resistance is also considerably increased, without compromising the weight factor.  CHEMTECH offers a toughness/weight ratio that is revolutionary in this particular sector.
Less heavy than rubber, polyurethane is also another good option for the mining sector. To increase its resistance to abrasion, STC Footwear combines it with an additional high-performance compound, thus optimizing its durability over time.
In the eyes of STC Footwear, the challenge in the mining sector is to offer a product as light as possible without sacrificing safety, durability, or the users’ comfort.