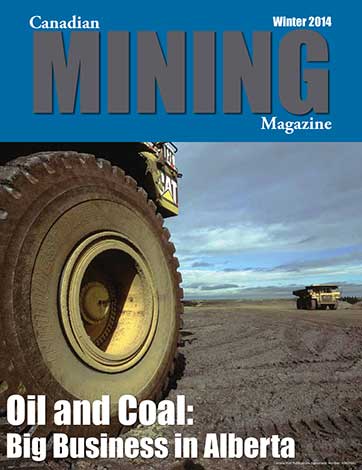 This issue of Canadian Mining Magazine  focused on mineral activity in Alberta. Our lead story, Mining Alberta: More Than Oil Sands, discussed coal mining in the province (about 30 million tonnes is mined each year). The Alberta coverage also discussed how resources in the province are transported, and showcased how a degree in mining engineering can open doors around the world.

Features in the magazine talked about surprise U.S. tax consequences for Canadian mining; Canadian restructuring alternatives for mining companies; the PDAC 2014 Convention; and the difference between environmental assessment and negotiated agreements in the Northwest Territories.

The magazine’s regular departments include a Transaction Report on private equity’s emerging role in the mining sector; and HR Report on how the current downturn is creating opportunities to train the next generation of miners; a Tax Time report on taxation policies in the far North; and Junior Mining News about leveraging corporate responsibility in the pursuit of financing. Tools of the Trade, News Watch and Upcoming Events round out this edition’s line-up.