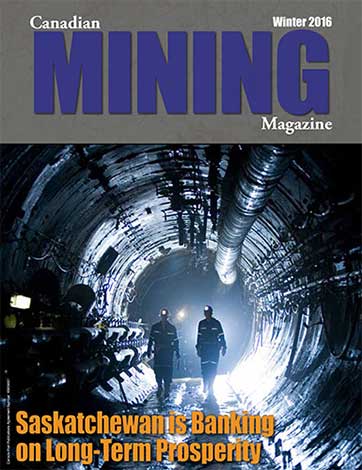 This issue of Canadian Mining Magazine explores the province of Saskatchewan. The central theme, banking on long-term prosperity, touches on the reality of today’s mining industry in both the province and Canada as a whole, but also focuses on the fact that Saskatchewan’s industry has a lot to look forward to.

This includes recognition by the Fraser Institute in 2014, as one of the most attractive mining jurisdictions in the world; the fact that the province is home to the richest uranium deposits on the planet; and the launch of production at the Cigar Lake mine, and the restart/expansion of the McClean Lake mill.

Our coverage of Saskatchewan also included information on the highly-anticipated K+S Potash Canada’s Legacy Project mine, and an in-depth look at the uranium market, which included forecasts, information on global demand, and details on uranium mining in the province.

Our feature article this issue discussed PDAC 2016, which will be taking Toronto by storm in March. The event typically draws 20,000 plus attendees, many of whom hail from around the world. In addition to this feature, the magazine’s regular departments include information on dealing with hard times, gender diversity, new CRIRSCO standards…and more.

Our cross-Canada News Watch round-up completes the magazine, with a look at mining activity in each region/province. Up next…British Columbia.